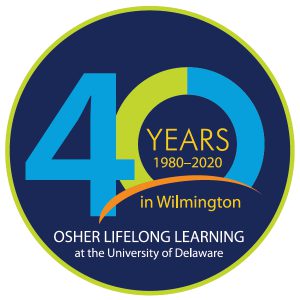 One spring evening in 1976, Art Trabant, President of the University of Delaware, commented to Jack Murray, head of the University’s Division of Continuing Education, “I think we should be planning something for the growing population of adults who are now beginning to reach retirement age in the Wilmington area. It has to be within a university context, of course, and should be educational in nature because we are a university. But it should also be something different, something unique and creative.”

Jack Murray began considering various ideas, including the idea of using Wilcastle, the old clubhouse of the Wilmington Country Club, which was located on the University’s Wilmington Campus and was being used by the University for evening classes. He passed his thoughts on to Richard Fischer, then the University’s Associate Director of Statewide Planning, and Nancy Aldrich, a Program Specialist in the Division. They put together a plan that was proposed to the University in the summer of 1979 and approved by Art Trabant in September of 1979.

Events moved rapidly. Louise Conner, former State Senator and civic leader, and Nancy Aldrich, liaison with the University, developed a nucleus of potential members and broadly publicized the ideas for the Academy. In late November 1979, nearly 200 people attended an informational open house at Wilcastle and 450 others expressed interest by telephone or in writing. From those who responded, a temporary steering committee, chaired by George Kazan, was formed to broaden interest in a lifelong learning program and develop a curriculum. By early January 1980, a curriculum of 22 courses had been developed and sent to all those who expressed interest, and on February 6, 1980, the Academy of Lifelong Learning opened on schedule for its first term. By its second term that fall, membership exceeded 200 and the number of courses had grown to 31.

The broad parameters of operation were those originally conceived: a program that is part of the University, with courses selected and taught by its members and a program that attracts vibrant, enthusiastic people of retirement age. The temporary steering committee concluded that the curriculum and other Academy programs should be determined by the members themselves. They established a permanent organization led by a governing Council of eleven members (later increased to 15 members with five elected each year). After elections in May 1980, the Council met in June and elected Bert Spivey as its first chair. The new Council then developed the organizational structure, including standing committees through which the work of the Academy was and still is conducted, from the Curriculum Committee to the Newsletter.

From the start and throughout its history, the Academy used the knowledge, talents, and experience of its members to provide a wide range of courses that are, in general, of a college level. The courses, as well as all other activities, are led by members who volunteer as teachers and program leaders according to their interests, abilities, and experience. The relationship with the University was and is critical. From the beginning, the Academy has been located on the Wilmington Campus of the University. Although during weekdays the Academy had priority use of Wilcastle Center and now Arsht Hall, the campus, and maintenance and operating expenses are shared with the other University operations, namely, Conference Services and the Division of Professional and Continuing Studies. The membership fees cover Academy costs. The Academy Council sets an annual budget which includes charges from the University for facilities, services, and staff. The University staff, from Nancy Aldrich to our present University Coordinator carry out the critical daily administration of the Academy. The Academy could not operate without the University nor could it operate without the hundreds of Academy volunteers who teach its courses, run its extracurricular activities and assist in its day-to-day operations.

The Academy met a real need for seniors and they responded to its intellectual, social, and cultural offerings. By 1983, more than fifty courses were offered to more than 500 students and, by the fall of 1986, eighty-six courses were offered to 826 members, all in Wilcastle. Responding to the ballooning market, the University began planning new facilities. Thanks to the generous pledge of Roxana and Sam Arsht, construction of Arsht Hall was authorized on December 8, 1988; ground was broken in May of 1990; and the building dedicated on October 18, 1991. In the end, the Arshts contributed $2 million, the members and friends of the Academy another million, and the University put up the remainder of the $6 million total cost. In the fall of 1991, the Academy of Lifelong Learning moved from Wilcastle to Arsht Hall. The vitality and quality of the Academy was reflected in its new building as well as almost 1400 members, with a curriculum of 108 courses.

The Academy had become the center of intellectual activity for retired adults in the area.

The Academy has grown to become an institution equal in size to this country’s most respected small, liberal-arts colleges. It is an institution greatly admired for the quality, scope, and diversity of its intellectual and cultural activities and an institution recognized as a leader in its own particular field—learning in retirement. In 2004, it celebrated a milestone 25-year anniversary. While it grew in size to about 2,100 members by the fall of 2004, over its quarter-century history, the Academy has maintained its intellectual focus. In 1981 the curriculum included 6 courses in 5 languages, 5 in literature, 7 in scientific subjects, 14 in artistic subjects and 7 social and political courses taught by a faculty of 33 volunteer instructors. In the fall of 2004, its 197 instructors taught 244 courses, including, among others, 45 in 10 languages, 68 in the humanities, 51 in artistic subjects, 15 in scientific subjects, and 6 in social and political subjects. But the intellectual scope of the Academy has also grown to include performing arts, such as the Academy Band, Chorus, and Circle Singers, and 50 computer courses ranging from beginner to expert.

In addition to its travel program, from the beginning the Academy has had social hours, extracurricular activities, and an outreach program to the community. In the 1980s the travel class organized many trips in the United States and abroad. These activities have continued and grown to also include a guest lecture series, musical ensembles, and many more extracurricular activities. Now there is also a summer session including a weeklong retreat program at Rehoboth Beach, as well as a summer lecture series and short four-week courses in Arsht Hall.

Finally, no history of the Academy is complete without recognizing the hundreds of volunteers, other than instructors, who now work in the administrative infrastructure of the Academy. These include the Council, the governing body, and more than 34 committees that deal with everything from curriculum and summer school to staffing the reading room and the reception desk, duplication, social hours, and much more. The teamwork within the Academy and the cooperation of the University make the Academy an outstanding opportunity for intellectual stimulation, cultural enrichment, and social interaction.

One of OLLI’s founding members, Albert “Bert” Guy Spivey, together with his late wife Jane Knapp Spivey, named the University as beneficiary of the Bert and Jane Spivey Endowment, a $1 million trust to support the Osher Lifelong Learning Institute. Mr. Spivey died on Dec. 23, 2010, and Mrs. Spivey passed away in 1999.

“Without Bert and Jane Spivey, the Osher Lifelong Learning Institute at UD would not be the strong, expansive and engaging program it is today,” said then UD President Patrick Harker. “When you understand just how much joy they took in learning and in sharing their knowledge with others, you understand not only the program’s guiding principles but also the wonderful community it serves.” Harker added, “This extraordinary gift is the Spiveys’ legacy, and there couldn’t be one more fitting or more beneficial to the state’s intellectual vibrancy.” [Read the full article.]

In 2017, OLLI celebrated the successful “Renewing the Dream” fundraising campaign, spearheaded by OLLI members Neil and Betsey Cullen along with then OLLI Wilmington council chair Pam Meitner. The $1.5 million campaign eventually closed at $1.78 million, resulting in the successful funding of Arsht Hall renovation projects in 2018 without raising member fees. [Read the full article.]

OLLI at UD is proud to be one of the oldest and largest lifelong learning programs in the country. The Wilmington program is celebrating its 40th year in 2020. Members created a booklet to celebrate the story of OLLI Wilmington’s founding, leadership, program and people. We hope you enjoy learning more about this leading educational co-op!