30 years of lifelong learning in Kent and Sussex Counties 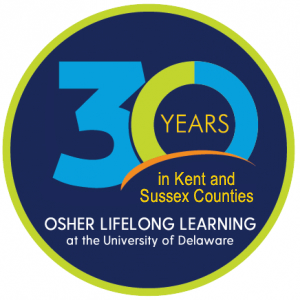 “Find broader horizons” was the program’s early motto and aptly illustrates the program’s story of growth and impacts in southern Delaware. Originally founded as the Southern Delaware Academy of Lifelong Learning (SDALL) in 1989, the program was modeled on UD’s Wilmington-based lifelong learning program founded 10 years earlier. The Wilmington program boasted attendees from as far away as Dover, Milford and Rehoboth, but by 1988 an enthusiastic 17-member steering committee formed to establish a dedicated program in southern Delaware. In 1989 with 59 founding members, the SDALL program offered its first courses in Milford, Delaware.

In 1993, the program moved to Lewes, Delaware, beginning its long and productive history in the community. Some highlights include:

Dr. Jim Broomall, UD’s longtime associate vice provost for professional and continuing studies, has been a committed champion of UD’s lifelong learning’s programs. “With modest beginnings the University’s Osher programs in Kent and Sussex County have grown to over 1,000 members today, with courses now offered in Dover, Lewes, and Ocean View to ensure that the Osher experience is accessible to Southern Delaware,” said Broomall. He added, “The program is an exemplar of the University’s tradition of and commitment to the land-grant university model.”

“I am continually inspired and excited to be a part of this vibrant program,” added Anna Moshier, current manager of UD’s OLLI programs in Kent and Sussex Counties. “Through OLLI members, I am learning to age with grace and dignity, benefiting from the knowledge, ideas and camaraderie shared here at the OLLI program. I look forward to expanding our horizons as we look toward OLLI’s future of continued growth and lifelong learning opportunities in Delaware.”